Moist red velvet cake topped with the most ethereal icing to ever hit the vegan world: sticky marshmallow icing. This adaptation of cloud frosting uses aquafaba instead of egg whites yet tastes exactly like marshmallow fluff and is what red velvet should have been paired with a long time ago. This Valentine (or anytime, really!) confection is allergy-friendly because it is free of: wheat, gluten, dairy, egg, soy, peanut & tree nuts. It’s vegan and top-8-free too! 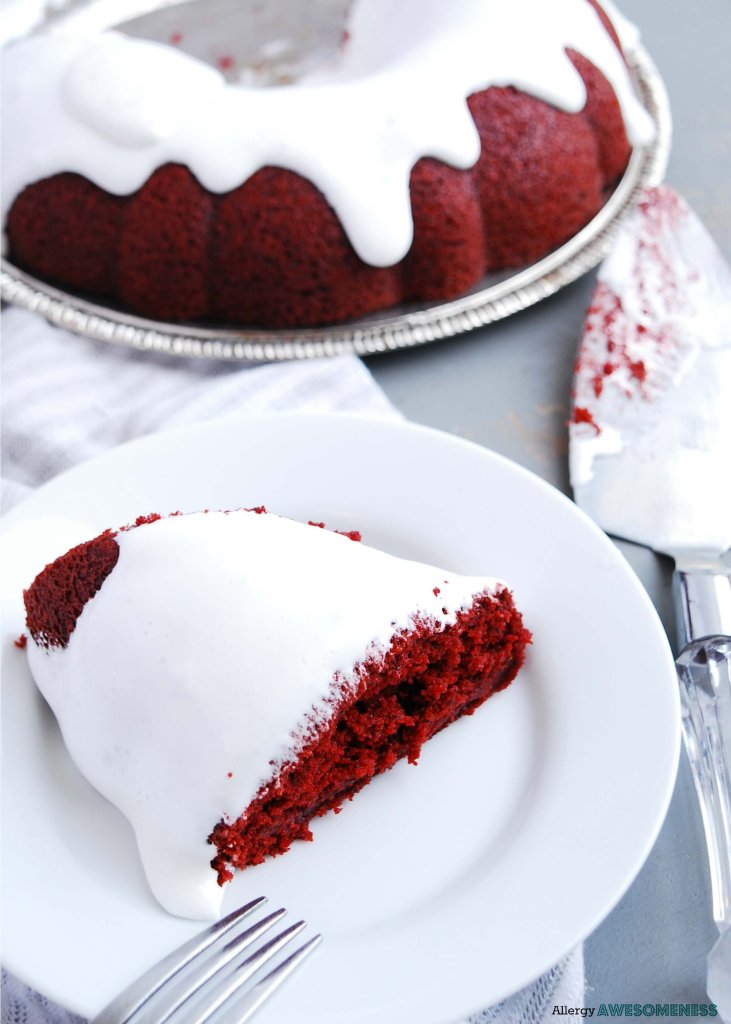 It was a classic recipe that was missing from my blog. Heck, it was even my best friend’s wedding cake flavor (hey Yesenia!). So, I knew once I posted it, it’d have to be a good one. After all, it’s beloved by so many.

So, I went to one of the culinary top sources in my opinion: America’s Test Kitchen. I feel like they have some well tested recipes up their sleeves, so I figured, if I could make theirs allergy-friendly I’d be winning. And win, I think I did. 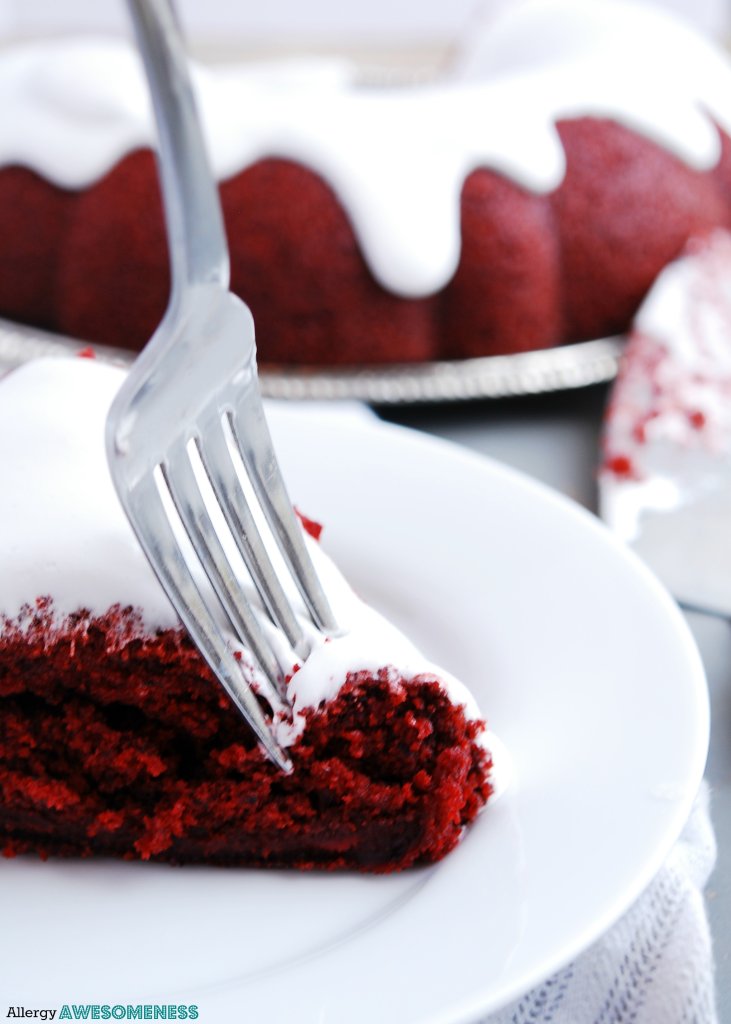 If you follow me on Instagram (if not–why?? It’s my favorite platform!) you’d see that I actually made this a few weeks ago, but was appalled at how the photos turned out and so I didn’t post it. I know some of you said to post it anyways and that you just wanted the recipe, but believe me–who wants to look at ugly cake? #ABitofAPerfectionist (Seriously though–have you tried photographing a dark red cake with bright white icing?? How do you even begin to expose for that…sigh. And before you say it–I know, I know–I need to break out of my white dish obsession. If only I had as big of a kitchen as I do in my dreams. #BustingOutOfIt)

And, unlike some bloggers, I don’t like to make recipes over and over back-to-back. I’ll sit on it for months at a time before I try it again because we actually try to eat everything I make and I hate getting sick of things. But, I just felt so bad in my heart of hearts having you guys go ANOTHER Valentine’s Day without some allergy-friendly red velvet cake. 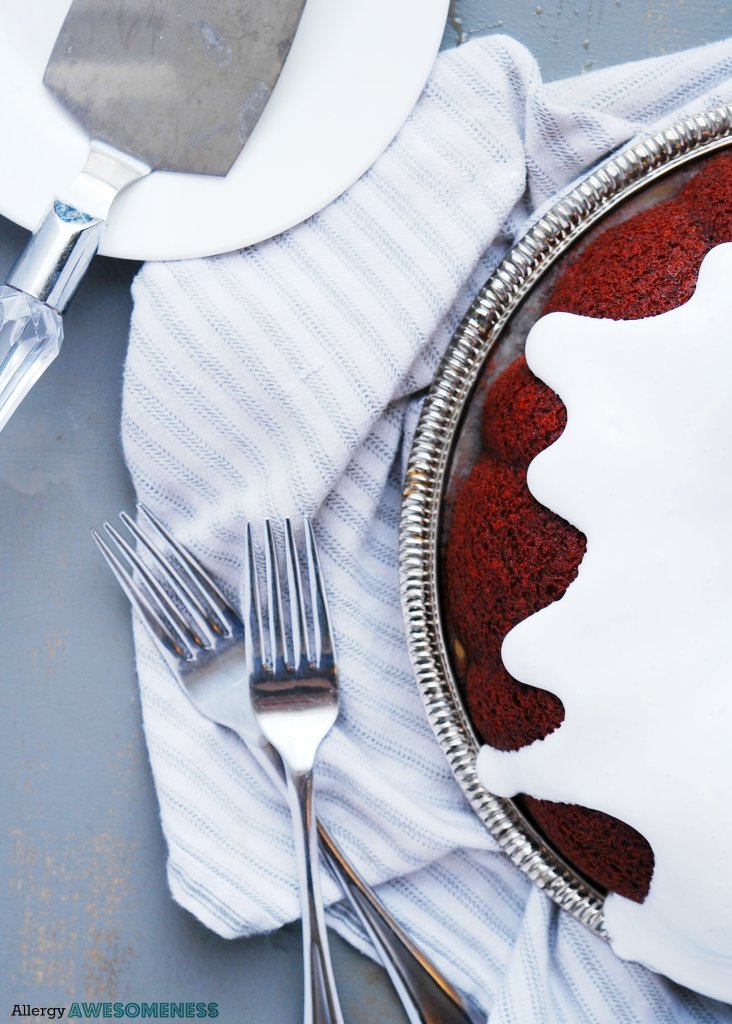 So, with just a few days to spare, I caved and made it again. I hope you’ll forgive me for the last minute posting. When I asked my boys if they’d mind me making “red cake” again they didn’t seem to mind at all!

I originally made it in a 13×9 dish–because that’s how I like most of my cakes. I rarely bother with layered cakes and that just fits my typical home-cook style. It’s easy and no fuss. But, it just wasn’t pretty on camera. So, note that you can bake this in a 13×9 too–it doesn’t have to be a bundt, but there is something so antique and fancy about the shape of a bundt. Plus, I think it really shows off the stark icing to the rich red color well with the fun way it slides down the sides. Totally up to you! 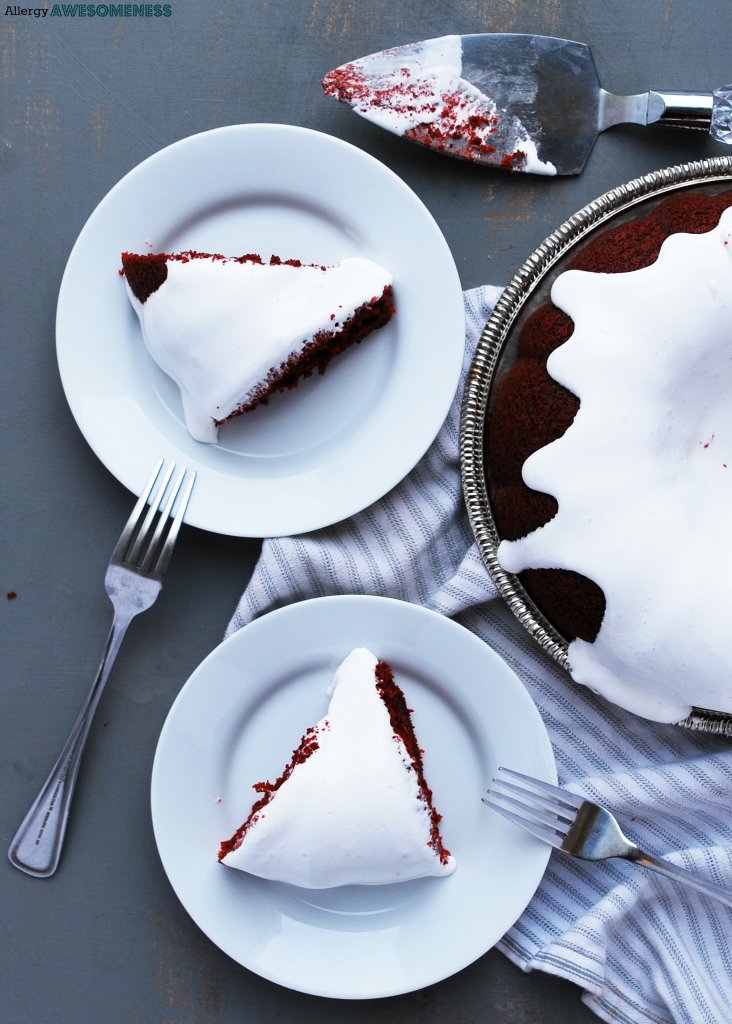 And this vegan sticky marshmallow icing??? Tell your mom, tell your friends and tell your grandma because every vegan needs to know about this. It may be my greatest achievement in my vegan baking days. No joke.

Let me back up a bit and say that I have loved marshmallow fluff since I was a child. I kid you not when I say that I asked Santa for some as a treat in my stocking one year (seriously–ask my mom). So, when I saw the whole “7-minute frosting” or “cloud frosting” (as it’s often called in normal baking) floating around I just couldn’t stand it any longer. I knew I had to try to make it without egg whites to make it vegan. 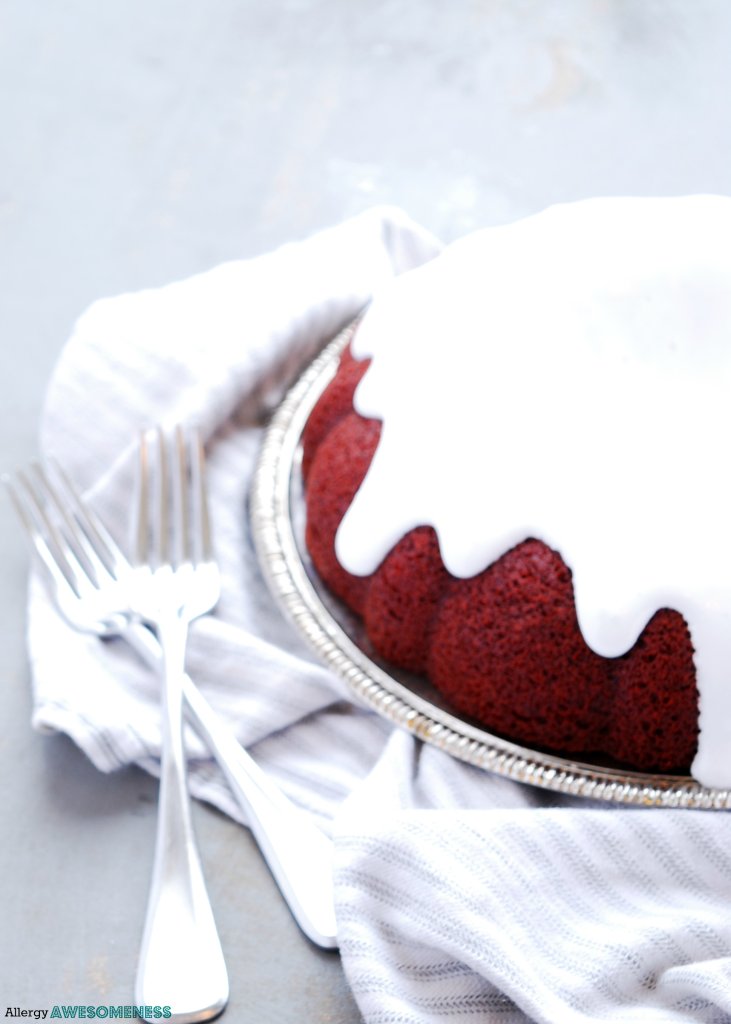 Thank goodness for aquafaba (also known as chick pea brine) and the way that beauty whips up just like egg whites. It did just the trick.

A thing to note about this vegan sticky marshmallow icing: It will not pipe. It’s more of a thick glaze–which is why it frosts this bundt so perfectly. You’ll notice that it leaves a LOT leftover if you do a bundt cake. It should frost it just right if you do a 13×9. I prefer to have extra leftover because I literally ate the ENTIRE rest of it with a spoon, minus a few spoonfuls to my kids. Wish I was kidding. If you’d like to half it, that’s fine. I did this amount because my stand mixer has a hard time reaching only a little amount, so it’s easier if I have more aquafaba liquid to begin with. You probably can’t go wrong.

So–let this be an extra special treat for your Valentine or just your gal-pal, friend, or amigo that loves classic red velvet cake, but happens to have food allergies or other dietary restrictions. I hope this will be a staple and a go-to for many celebrations hereafter. Enjoy this Gluten-free Vegan Red Velvet Bundt Cake with Sticky Marshmallow Icing. (Seriously, you’ll wonder why you ever did cream cheese frosting. But, just in case, here’s my recipe for dairy-free vegan cream cheese frosting.) 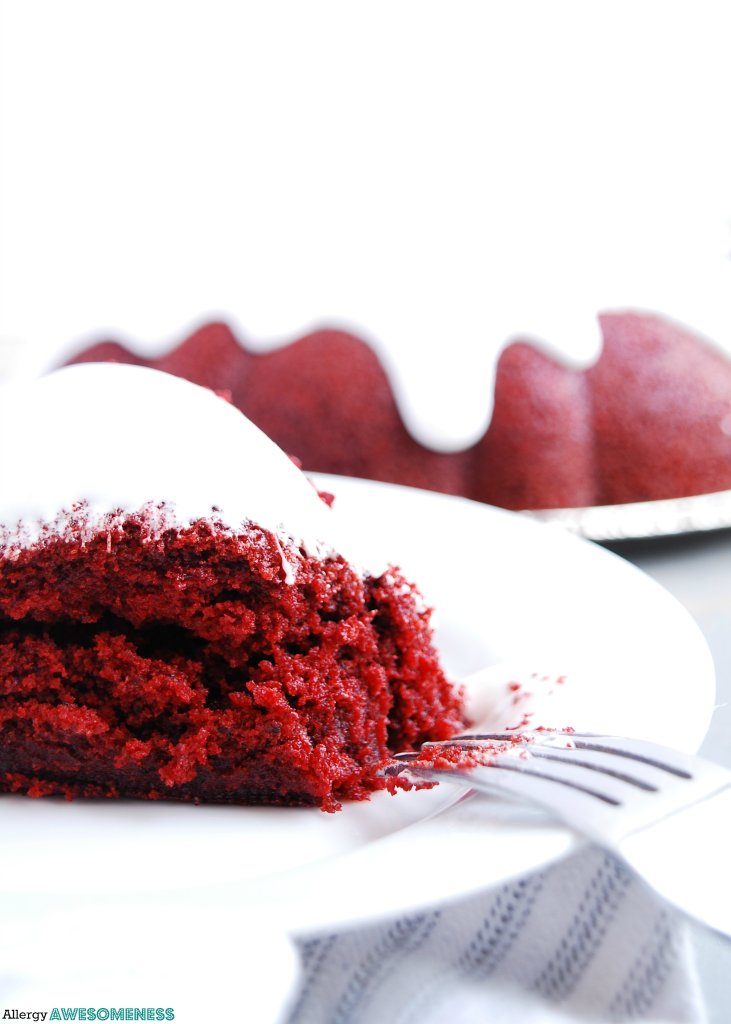 Preheat the oven to 350 degrees F.

In a bowl, combine all of the liquid ingredients which comprise of: the food coloring, vanilla, white vinegar, flax eggs, and rice milk. Set it aside.

In a stand mixer with the paddle attachment, cream the butter and sugar. Next, add in the baking soda, salt and xanthan. Using a fine mesh strainer shift in the cocoa, to ensure there are no clumps. Stir to combine.

Next, alternate adding in the flour and the bowl of liquid until everything is incorporated.

Bake in a heavily greased bundt pan for 25-30 minutes, or until done.

Allow to cool in the pan for 5 minutes, then invert on a wire rack and remove the bundt pan. Allow it to cool completely while you make the icing.

In a stand mixer with the whisk attachment, beat on high the aquafaba and salt until it reaches soft peaks.

Once it's hit the soft peak stage (when you pull the whisk out, it will form a peak that curves and falls over softly). Keep the mixture running and slowly add in the sugar and ensure it's beat it enough to incorporate it (so it won't be grainy.)

Meanwhile, in a small saucepan over high heat, heat your corn syrup until it's boiling.

Turn the mixer back onto high and slowly pour in the corn syrup mixture. Beat for at least five minutes on high. You will notice it will become glossy and become thicker.

Add the vanilla and stir for one final minute.

Be sure to scrape the sides of the bowl and then bowl pour gently onto the cake.

The top of the icing will set, so if you ever want to do sprinkles, be sure to do them immediately. The icing does not keep well, so plan to serve the cake within the day it's made. Enjoy the rest with a spoon!

As an Amazon Associate and member of other affiliate programs, I earn from qualifying purchases.

DON’T FORGET TO PIN IT, SO YOU DON’T LOSE IT. ALSO, BE SURE TO CHECK OUT MY OTHER ALLERGY-FRIENDLY PINTEREST BOARDS.

Looking for other sweets? Check out my other favorite allergy-friendly Valentine’s treats: 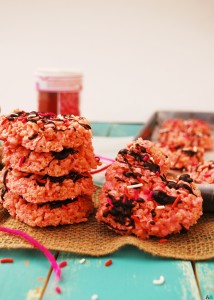 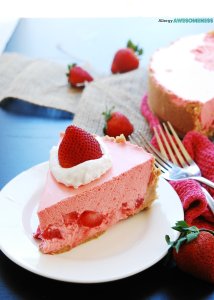 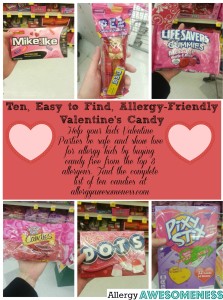 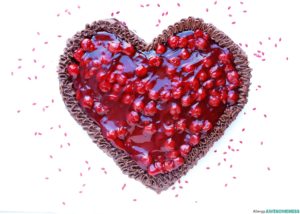