This cobbler is a semi-homemade dessert with a soft vanilla cake sandwiching a gooey layer of cherry pie filling. Topped with a sweet drizzle, this is an easy and crowd pleasing dessert. Free of gluten, dairy, eggs, soy, peanut and tree nuts. Top eight free and vegan too! 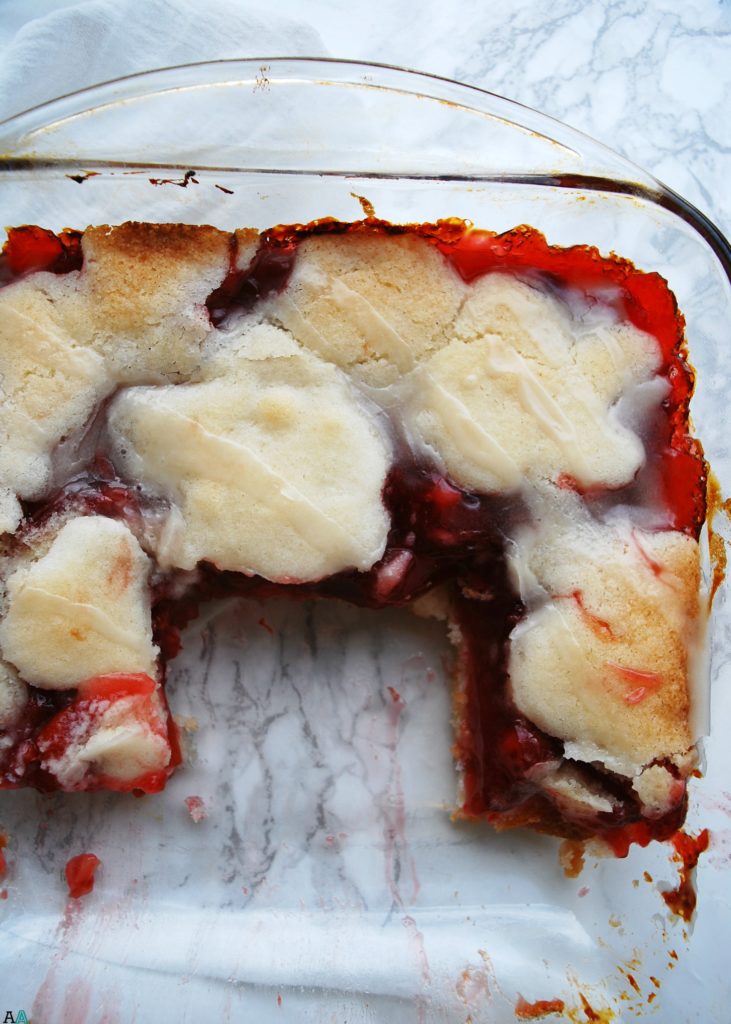 Good news guys! My bestie, Alicia, moved by me! After almost twelve years of living in different states, we’re “reunited and it feels so good!”. We’ve been having BBQs, taking our kids to splash pads and going to movies. It’s been just what my heart needed.

I’m not sure about you guys, but I feel like I am CONSTANTLY inviting other kids over to play–but we hardly ever get asked over in return. I’m not sure if it’s because people feel uncomfortable with my sons’s allergies (what they’ll feed him, having to use the epi pen on him if an emergency happens) but it stinks not feeling like you’re invited places or that it’s reciprocal. I appreciated the honesty, but one time a mom literally told me she wasn’t comfortable watching my son because she was worried something would accidentally happen. I get it–it is a responsibility, but it still made me sad. 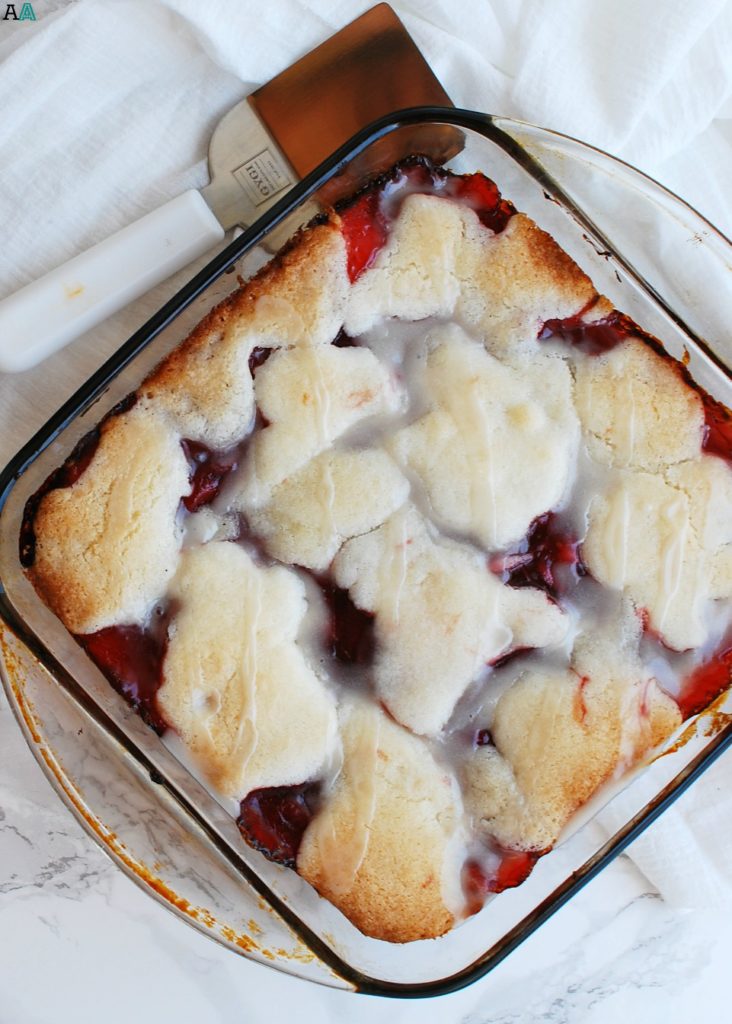 It works always having other kids over (although it is a chore and gets old sometimes), because then the play dates are in an environment I know he’s safe, but it still would be nice…you know? Who knows–maybe it’s not the allergies, perhaps we’re just plain crazy! Haha.

Regardless, it’s so nice to have a mommy friend that I can do play dates with and hang out with while our hubbies are at work! My bestie is so conscientious and careful about my son’s allergies and is always happy to modify treats and foods. She is so kind and considerate. She has two kids as well and they all play together great. It’s soooo nice! Raising 2nd generation friends! In fact, my son asked out of the blue if he could marry her daughter–to which I promptly replied YES! 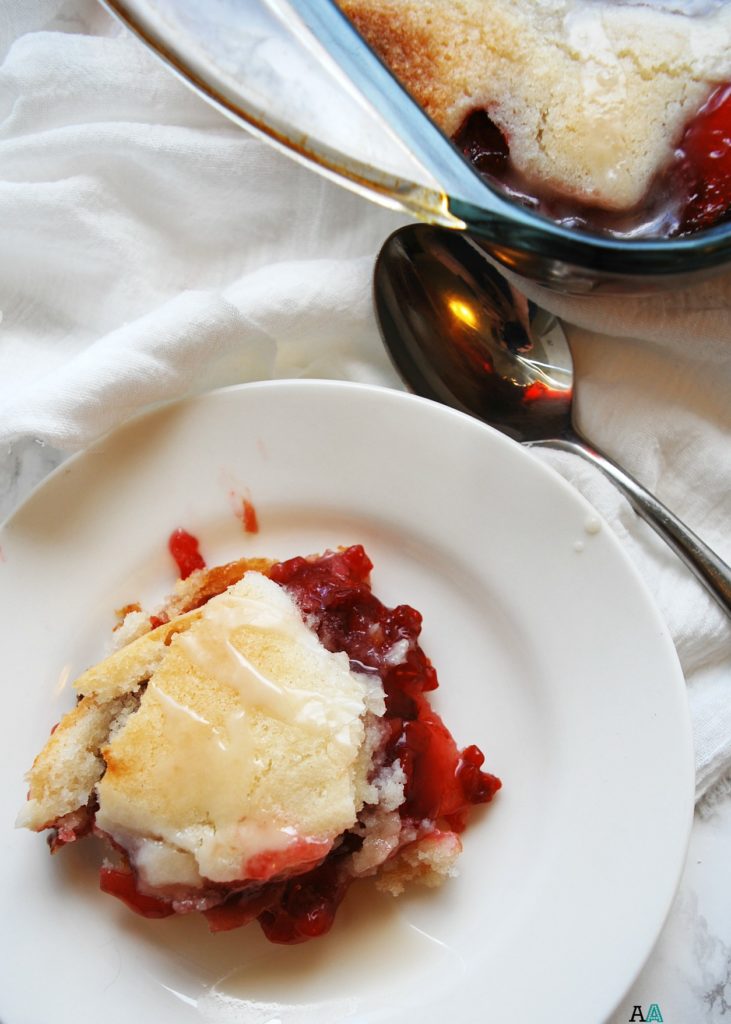 What works out even better is that my friend does not like to bake and I do. So, when she invited me over for a BBQ, she asked if I’d bring the dessert. I love it when all I have to do is dessert. It’s hard to want to make dinner AND dessert when it’s just your family. So, of course I jumped at the chance to try out a new dessert recipe. Her and her husband are great taste testers. In fact, the original recipe that I tweaked this from was called “Cherry Pie Bars” but after thorough taste testing, we all agreed it didn’t have a flakey crust, and it was definitely more of a cobbler. They’re so helpful!

If I could have one wish for every food allergy mom, it would be that they have an Alicia in their lives. It makes the whole food-allergy crazy life so much more bearable. In fact, looking back, I should have made her an entire dessert just for herself–she’s that awesome.

Enjoy this cherry cobbler with a friend too. It’s quite easy, and the perfect mix of cake and cherries. It’s sweet and would even be great with some non-dairy vanilla ice cream on top. 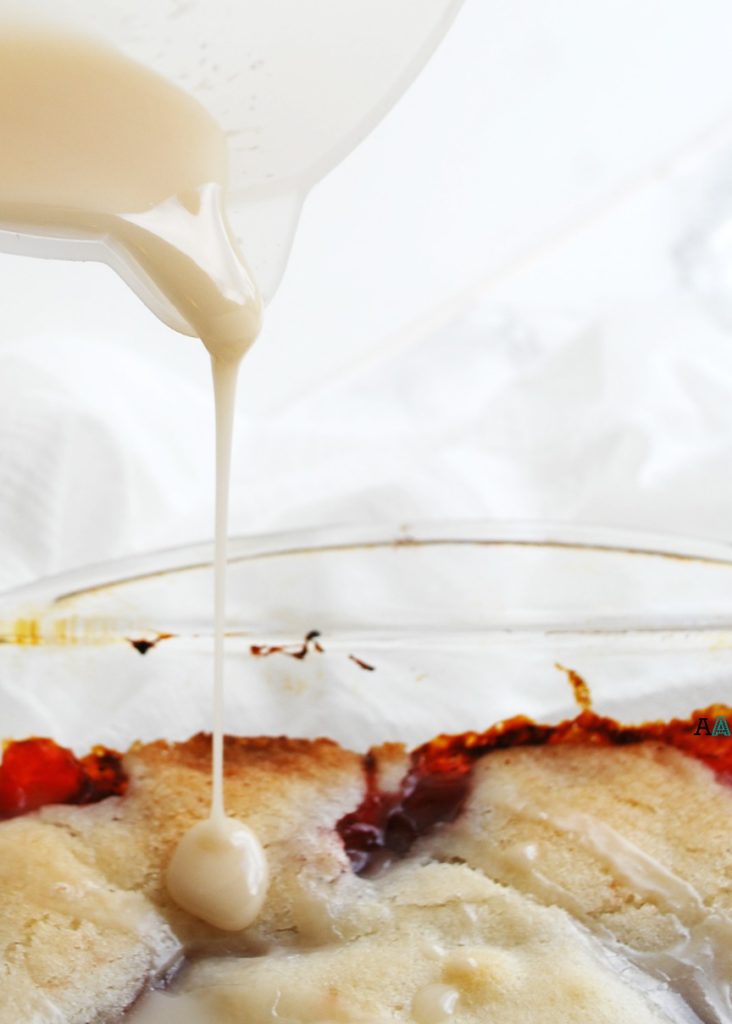 Preheat the oven to 350 degrees F.

In a stand mixer, with the paddle attachment, cream the buttery spread and sugar. Next, add the egg replacer, milk, and vanilla and blend well.

With the stand mixer on low, add the salt and flour until incorporated.

Spread 3/4 of the cake mixture onto the bottom of the pan.

Then, spread the entire can of cherry pie filling over it.

Drop the rest of the batter on top of the cherry layer by spoonful. It won't cover the entire top, but I like that the pretty cherries show through.

Bake for 45 minutes, or until the top is set and the corners are starting to brown.

While it's baking, make the glaze by whisking all of the glaze ingredients together. Once the cobbler is cooked and cooled, drizzle the glaze on top. Serve and enjoy. 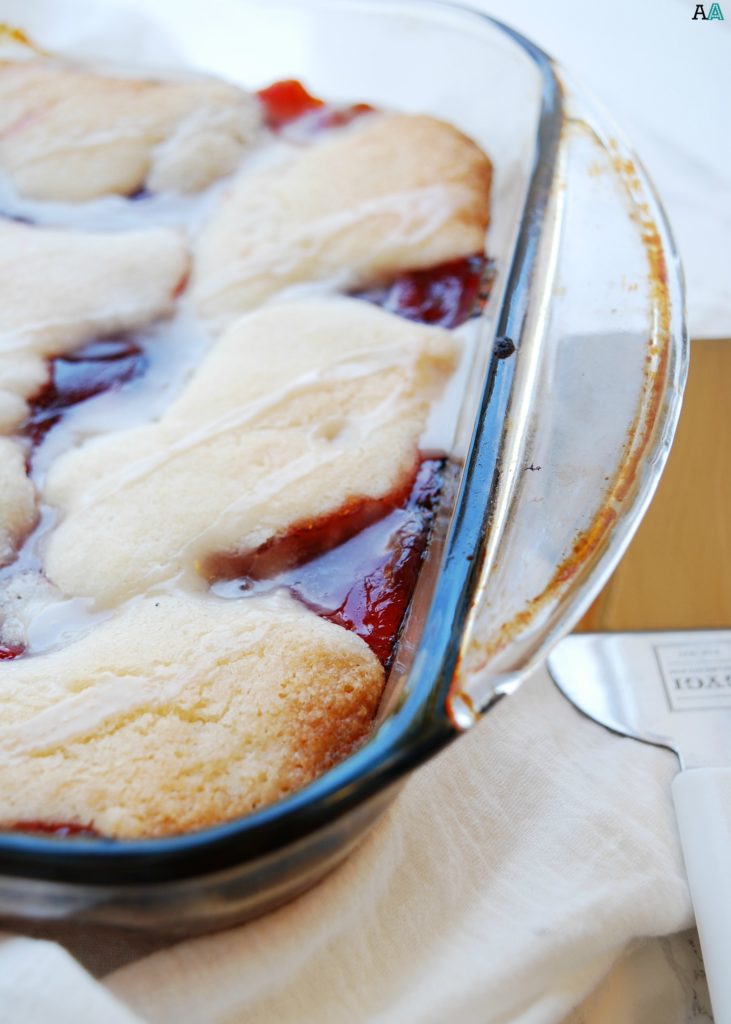 Adapted from: Julie’s Eats and Treats

Don’t forget to pin this so you don’t lose it!